i thought this had happened with mine but when i scrolled left instead of right i enjoyed  that it had just moved underground in a different direction.

Super cute game! The presentation is bright, colorful, and charming. For the most part the puzzles themselves are quite simple, but it's still fun just prodding at the lively puzzle-box levels. I really enjoyed the music and sound design, definitely the highlight of the game for me. Definitely would recommend this to anyone looking to spend an enjoyable hour or so.

Is the included VR shortcut supposed to be linked to the default build directory (D:\Projects\Unity\gnog-standalone-build\Builds\win\standalone\GNOG.exe)? It doesn't work since the path is wrong, and while I know I could fix it by using a batch file instead I think that's something the game should include.

How did you managed to fix it?

Was gunna leave a review and a rating like I do with all the Itch.io games I play, but I can't seem to find it here? Anywho here's my review.

Gnog is a really good puzzle game. It's extremely surreal and cutesy. The game is pretty much just a series of puzzle boxes, and I really love this concept. Game plays well, and while I got confused sometimes, the puzzles are easy enough. That's my only gripe with the game. Puzzles were too easy at times. Maybe 1 or 2 of the puzzles really tricked me. Other than that, really well done. Enjoyed my time.

started playing today and immediately fell in love with it!

loved the game a ton. a total must pick if you got the huge bundle. only took a little over an hour to complete, but it was a really great stress releave for me! even for the short experience, totallly worth the 9 dollars, and especially if you got the big bundle on itch

I've been greatly enjoying playing GNOG today, however, I unfortunately appear to have encountered a couple of progress blocking bugs. They both happened in my final level, LAB-0. The first time I attempted it, I somehow managed to release a lot of steam in the upper area, preventing me from interacting with the wheel to change the top symbol. The second time around, I did everything I could think of to progress, even checking a walkthrough after quite some time. As far as I can tell, everything looks exactly as it should, the only difference being that I can't seem to get the beam level all the way to max position. Any time I drag the lever it appears to snap back to a position that is not quite full (see attached gif).

Other than this I can't nothing seems to differ from the aforementioned walkthrough.

Apologies, I have located and solved the issue myself. It seems that, despite showing the correct symbol, one of the wheels was not quite rotated to the right position.

Hello I work with SideQuest at https://sidequestvr.com/#/ and I wanted to ask if you were at all considering a Oculus Quest port for your game whatsoever, It looks quite fun and having it on SideQuest would be a treat.  We would love to see GNOG reach more people so If you ever do consider making an APK version for the Oculus Quest we would love to have you with us, Our aim is to help host and distribute games as easily as possible for any developer, If you want to sell your game you can even link the listing you set up on SideQuest directly to Itch.io for easy purchase set up. Listing on SideQuest is also completely free. If you're interested at all there's more information on how you would can submit an application or game to SideQuest here: https://github.com/the-expanse/SideQuest/wiki/How-To-Submit-Games and for an example of a listing currently on us using Itch integration you can see here: https://sidequestvr.com/#/app/358

In any case best wishes and we hope for the brightest of futures for you.

hey thanks for your interest but unfortunately we do not have plans to support this. Thanks for checkin in!

Not at all, It is unfortunate but understandable as moving a game to a new format is not as easy as it sounds. I do wish you the best of luck in any future games be they in VR in or not.

Any chance you're looking to let loose a sideloadable APK for the Quest?

Hmm unlikely to be honest, sorry!

Hello, I just buy the game but I don't see my steam key in my download page, and the page of the game says that it comes with a steam key.

Hi there! Just checked and the keys are properly set up in our backend so not sure what's going on. If you're still having trouble you can email contact AT ko-opmode.com and we'll set you up with a key.

So this is a screnshot of my download page, the button that says "get steam key" don't appear at all. 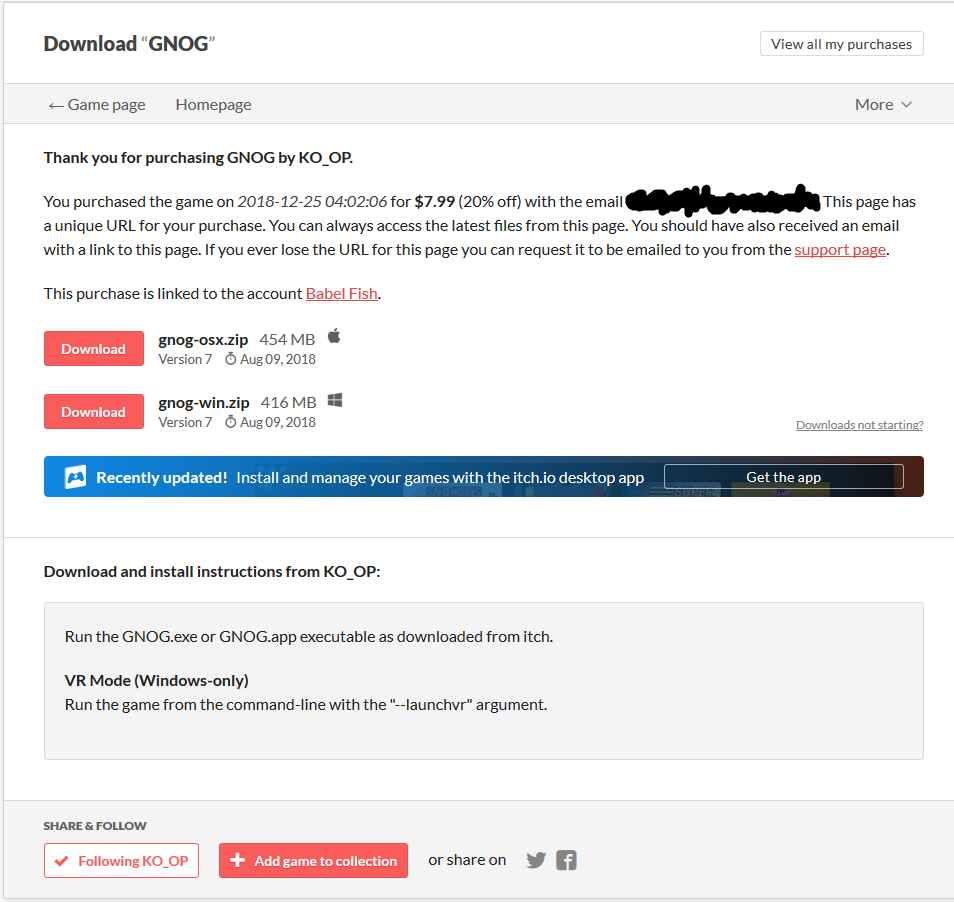 The music in this game is so nice, bouncy, and crisp! It's like listening to Dolby Digital Surrond-Sound in a Theater!

I think we'd like to but we haven't had a machine to test on yet. We'll be looking into it after all the patching is done!

Beautiful! You know we penguins are always happy to test and report bugs :)

Any update on the Linux plans at all?

Works flawlessly via wine in Linux.  I'm probably half way through the game and haven't noticed a single problem.

I do prefer to support developers doing Linux proper though :)

What an amazing little, trippy game.  The music, visuals, and artwork are generally outstanding.  If you're looking for something deep, this isn't it, but it's a lovely way to pass the time.